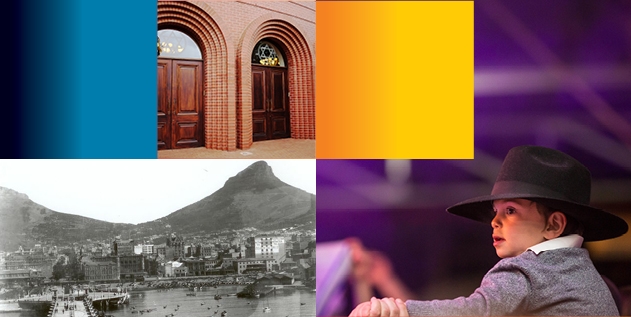 The South African Jewish community traces its origins to the early decades of the 19th Century, when small numbers of Jewish immigrants, mainly from the United Kingdom and Germany, began settling in what are today South Africa’s Western Cape and Eastern Cape provinces. This included three Jewish families who arrived as part of the large group of British immigrants subsequently known as the 1820 Settlers. In 1841, seventeen Jews organised the first Hebrew Congregation in Cape Town, called the Tikvat Israel Congregation. Thereafter, the community grew slowly, with further congregations being established in, amongst other cities, Port Elizabeth and Kimberley. In 1880, the combined Jewish population of the various territories that make up modern-day South Africa was estimated at 4000 people. Thereafter, however, a huge influx of Jewish immigrants from Eastern Europe – mainly Lithuania and its environs – saw the community grow dramatically over the next half century, before new laws specifically aimed at curtailing further Jewish immigration were passed in 1930 and 1937.

On the eve of World War II, the Jewish population numbered just over 90 000. It continued to grow steadily, reaching a peak of 118 200 in 1970. Thereafter, mainly as a result of political unrest, the community began decreasing, and today it numbers around 75 000 people. Most South African Jews today trace their origins to the arrival of East European immigrants. During the 1930s, there was a further influx from Germany as a result of Nazi persecution and from the 1970s, from Israel and a number of Southern African states, including Zimbabwe, Zambia and Namibia.

As the community grew, both in numbers and influence, Jewish communal institutions began to emerge. The South African Zionist Federation was founded in 1898, and over the next eight decades was the dominant Jewish communal organisation. South African Jewry has long been noted for its strong support for Zionism and the State of Israel. The Transvaal branch of the Jewish Board of Deputies was established in 1903 and the Cape branch a year later. The two branches merged to form the South African Jewish Board of Deputies (SAJBD) in 1912.

Despite attrition through emigration, South African Jewry remains by far the largest Jewish community on the African continent. Most Jews today live in Johannesburg (50,000) and Cape Town (16,000), while the other main centres are Durban (2000) and Pretoria (1000). Originally, the community was spread throughout the country, but the rural communities began declining shortly after World War II and are today largely defunct.

The Jewish community is remarkably well-organised and cohesive, with a comprehensive network of welfare, educational, political and Zionist institutions in every major Jewish population centre. The acknowledged Jewish civil rights organisation is the SAJBD which, amongst other things, monitors levels of antisemitism in the country and where necessary takes action. The SAJBD seeks to foster good relations with the Government of the day and meets regularly with key political leaders from across the political spectrum.

In the religious sphere, South African Jews are overwhelmingly affiliated to Orthodox congregations, comprising some 88% of the total. The Progressive movement accounts for most of the remaining affiliated Jews and there is one small Conservative congregation in Johannesburg.