A fascinating account into the life of an Israeli Ambassador

The World Conference Against Racism, held in Durban in 2001, left a psychological scar on anyone who witnessed the blatant anti-Semitism that accompanied it. But what was it like for Israel’s ambassador to South Africa at the time, Tova Herzl?

Would Israel and the US in fact participate? Was it the right decision to boycott it altogether? Would it not have been better to stay at the conference, and battle it out?

These are some of the questions that Herzl asks herself in her book, “Madame Ambassador: Behind the scenes with a candid Israeli Diplomat”.
It would indeed be hard to find a more candid and honest account of diplomatic life for Israeli diplomats.

Herzl is upfront about some of the dilemmas that faced her-whether to learn Russian when going to the Baltic States, how to engage with Holocaust memory, what the response should be to the Jonathan Pollard controversy and how best to deal with hostile anti-Israel sentiment in South Africa.
She writes about important issues for Israel and explains how easily diplomatic misunderstandings can happen. And, while there are some meaty discussions on topics such as the relationship between Judaism and other religions, and Israeli versus Jewish identity, her book is so much more.
She has a keen sense of humour and provides some laugh-aloud moments in which we get glimpses of faux pas that have left her blushing and the reader cringing in sympathy and embarrassment (see the chapters entitled “Diplomacy and Dignity” and “Bodyguards”).
She also describes the occasional loneliness that comes with being a single, religious Orthodox woman.
There are also times when her personal and professional life cannot be separated, such as when Herzl’s 17-year-old niece was killed in a suicide attack in Jerusalem in 2002, while she was ambassador to South Africa, and she makes poignant comments.
Herzl devoted her life to the Israeli Foreign Service. Her book answers many of the questions she was asked while being a diplomat: “Oh, the enviable luxurious life of diplomats, right? Fabulous mansions in exclusive neighbourhoods, obedient staff to fulfil every whim, fancy cars with elegant drivers waiting to take them to fascinating encounters with glamorous celebrities, and fantastic salaries to top it all. Well, not exactly…”
In answering these questions, Herzl reflects not only on her life, but also provides rare and rich descriptions of daily life in the diplomatic corps. For South Africans, it resonates with our not too distant past. 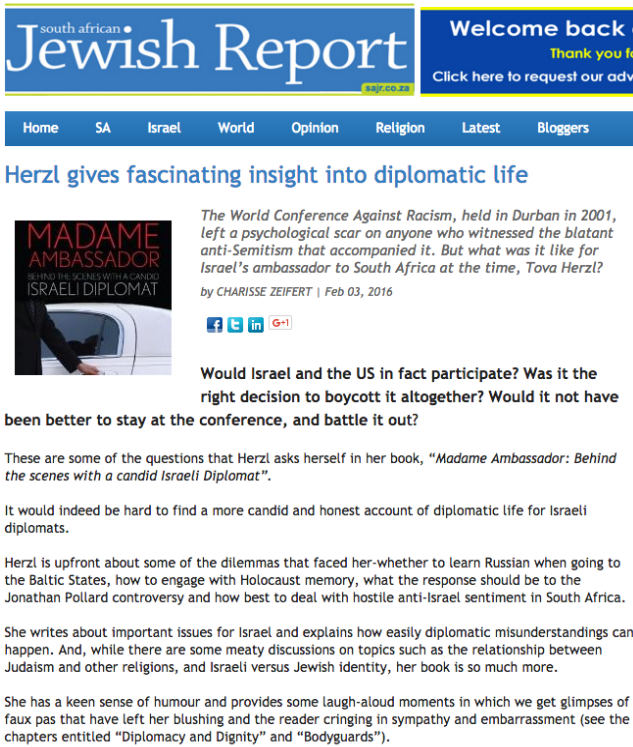