BDS Has Made A Mockery Of Constitution

Kwara Kekana, spokeswoman for BDS celebrates the 10 year anniversary of BDS in her opinion piece in The Star 12/08/2015. What Ms Kekana chooses not to share is that the real outcome of their campaigns has been to foster a campaign of hatred against South African Jewry for their relationship with Israel.

In October last year a man entered a Woolworths store in Sea Point in Cape Town pushing a baby’s pram. He walked over to what he understood to be a Kosher meat shelf, reached into the pram and pulled out a pigs head placing it on the shelf and then proudly tweeted about his `accomplishment’. He boasted about his response to BDS’s call to boycott Woolworths. Just another victory for the BDS organization; their calls to target Woolworths had resulted in yet another antisemitic incident. Far from BDS trying to harness our country’s history for its narrow motives, it has instead made a mockery of our constitution that we hold so dear. Its process of intimidation deprives fellow South Africans the rights to freedom of speech, freedom of association and the freedom of religion and belief and opinion, as prescribed by our Bill of Rights. BDS has spent 10 years telling us what we must say, where we can shop, what functions we can attend and which academics we can learn from in our universities. If you don’t toe their line, you are subjected to intimidation, threatened and harassed.

Kwara Kekana has a fixation on the term `ethical company’, yet her own company could not be further from this standard. If BDS had any modicum of ethics they would have been appalled at the calls to deregister Jewish students from Durban University of Technology following their hosting of BDS guest Leila Khaled there the night before. If they subscribed to any values of decency they would have taken action against their coordinator Mohammed Desai who justified the singing of Dubula iJuda (shoot the Jew) at a BDS protest at Wits University as Jewish audience members arrived for a concert.

A company interested in ethics would not tolerate their members disrupting a Jewish community event by grabbing the microphone and they wouldn’t throw stinkbombs at the same time as bomb threats were called in to the theatre venue.Two weeks ago BDS Coordinator Desai sent a threat to organisers of a private function, where Young South Africans returning from Israel would be reporting back on their experiences, that he and 35 BDS groupies with `the media’ in tow would gatecrash the event. Organisers were under no illusion as to BDS’s motives to disrupt the proceedings. There are countless examples of their attempts to do this, including the piano concert performance at Wits where groups of BDS supports stormed the venue forcing the pianist and many audience members to flee in fear. Or more recently when BDS thugs can be seen on camera preventing Palestinian Human Rights Activist Bassem Eid from continuing his speech to students at the University of Johannesburg, simply because Eid provided a different picture of the situation in Israel and the Palestinian Territories.

Again our constitutional rights are tossed aside for BDS’s righteous attempt at `ethics’.If you don’t kow tow to BDS’s demands, you will become the target of their intimidation campaign. And let’s be under no illusions, this is not about `Palestinian Solidarity’, it is vile, unmitigated antisemitism. Kekana claims they select consumer campaigns after careful analysis and strategic consideration.” Their `careful analysis and strategic consideration’ involves identifying and targeting South African Jewish businesspeople, threatening them and their businesses should they not comply with their edicts. The owners of Reggies, Dischem and Cape Union Mart are just a few of the Jewish businesspeople targeted by these antisemtic threats. We fail to understand how intimidating South African Jewish businesspeople will in any way further the peace process. On the contrary, all it does is harden relationships and cause hatred between fellow South Africans. It certainly differs from our government’s stance on trade with Israel as articulated in a DTI statement on 6/8/2014, “People in South Africa are free to trade with Israel, and Israel is free to trade with South Africa.” And don’t for one minute consider that these boycotts are `non-violent’ as Ms Kekana would like us to believe.

Last year, following on the Pigs Head incident a group of students responding to the BDS calls to disrupt Woolworths stores looting a store in the Sammy Marks Square in Pretoria causing over R200 000 of damage to merchandise. This doesn’t sound peaceful to me. The reason a South African court granted an interdict against BDS protesters entering Woolworths’ stores was because of the threats and intimidation against Woolworths’ employees and customers.

Kekana ends her opinion piece quoting Archbishop Emeritus Desmond Tutu, “If you are neutral in situations of injustice, you have chosen the side of the oppressor.” It is time that South Africans see BDS for what it is; an organization that is bent on intimidating and threatening people who dare not share their views, with purely antisemtic motives as evidenced by the outcomes of their campaigns.The SAJBD believes that these hate campaigns do nothing to further the peace process between the Palestinian and Israeli people, they only create unwanted racism in our country. We as fellow South Africans should stand up against this destructive organisation ensuring that our precious values enshrined in our constitution are upheld. 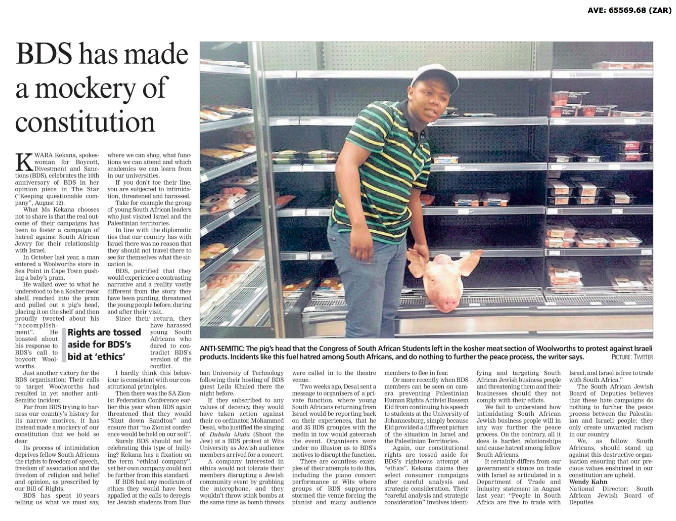