“The Truth and UNtruth of the Matter” 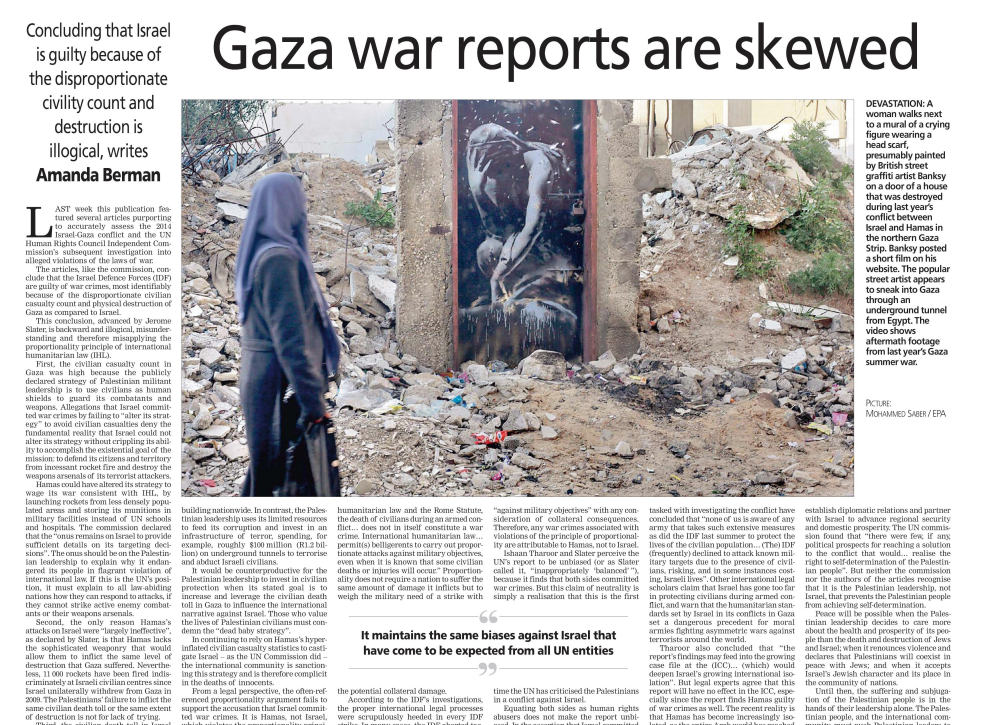 Last week, this publication featured several articles purporting to accurately assess the 2014 Israel-Gaza conflict and the UN Human Rights Council Independent Commission’s subsequent investigation into alleged violations of the laws of war. These articles, like the Commission, conclude that the Israel Defense Forces (IDF) is guilty of various war crimes, most identifiably because of the disproportionate civilian casualty count and physical destruction of Gaza as compared to Israel. This conclusion, rabidly advanced by Jerome Slater, is both backward and illogical, misunderstanding and therefore misapplying the proportionality principle of international humanitarian law (IHL).

First, the civilian casualty count in Gaza was high because the publicly declared strategy of Palestinian militant leadership is to use civilians as human shields to guard its combatants and weapons. Allegations that Israel committed war crimes by failing to “alter its strategy” to avoid civilian casualties deny the fundamental reality that Israel could not alter its strategy without crippling its ability to accomplish the existential goal of the mission: to defend its citizens and territory from incessant rocket fire and destroy the weapons arsenals of its terrorist attackers.

Hamas, in contrast, could easily have altered its strategy to wage its war consistent with IHL, by launching rockets from less densely populated areas, and by storing its munitions in military facilities instead of UN schools and hospitals. The Commission declared that the “onus remains on Israel to provide sufficient details on its targeting decisions,” but the onus should be on Palestinian leadership to explain why it deliberately endangered its own people in such flagrant violation of international law. If this is the UN’s position, it must explain to all law-abiding nations how they can respond to attacks on their citizens and sovereign territory, if they cannot defensively strike active enemy combatants or their weapons arsenals.

Second, the only reason Hamas’s attacks on Israel were “largely ineffective,” as declared by Mr. Slater, is because Hamas lacks the sophisticated weaponry that would allow them to inflict the same level of destruction that Gaza suffered. Nevertheless, 11,000 rockets have been fired indiscriminately at Israeli civilian centers since Israel unilaterally withdrew from Gaza in 2009. The Palestinians’ failure to inflict the same civilian death toll or the same extent of destruction is not for lack of trying.
Third, the civilian death toll in Israel was relatively low because Israel invests heavily in protective technology and infrastructure, like the Iron Dome missile defense system, and the bomb shelters or designated safe areas required in every building nationwide. In contrast, the Palestinian leadership uses its limited resources to feed its own corruption and to invest in an infrastructure of terror, spending, for example, roughly $100 million on underground tunnels to terrorize and abduct Israeli civilians.

It would be counterproductive for the Palestinian leadership to invest in civilian protection when its stated goal is to increase and leverage the civilian death toll in Gaza to improperly influence the international narrative against Israel. Those who truly value the lives of Palestinian civilians mustvociferously condemn the “dead baby strategy”. In continuing to rely on Hamas’s hyper-inflated civilian casualty statistics to castigate Israel – as the UN Commission did – the international community is sanctioning this strategy and is therefore complicit in the deaths of innocents.
From a legal perspective, the often-referenced proportionality argument fails to support the accusation that Israel committed war crimes. It is Hamas, not Israel, which persistently violates the proportionality principle by intentionally waging indiscriminate attacks on civilian population centers.
Luis Moreno-Ocampo, former Chief Prosecutor of the International Criminal Court (ICC), said that, “Under international humanitarian law and the Rome Statute, the death of civilians during an armed conflict … does not in itself constitute a war crime. International humanitarian law…permit[s] belligerents to carry out proportionate attacks against military objectives, even when it is known that some civilian deaths or injuries will occur.” “Proportionality” in the context of IHL does not require a nation to suffer the same amount of damage it inflicts, but to weigh the military need of a strike with the potential collateral damage.

According to the IDF’s comprehensive and transparent internal investigations, the proper international legal processes were scrupulously heeded in every IDF strike. In many cases, the IDF aborted tactically advantageous missions to spare civilian lives. It would be laughable to suggest that Hamas undertook any such investigations, or that offensive and indiscriminate Palestinian rocket fire was carried out “against military objectives” with any consideration of collateral consequences. Therefore, any war crimes associated with violations of the principle of proportionality are attributable to Hamas, not to Israel.

Ishaan Tharoor and Jerome Slater perceive the UN’s report to be unbiased (or as Slater called it, “inappropriately ‘balanced’”), because it finds that both sides committed war crimes. But this claim of neutrality is simply a realization that this is the first time the UN has ever criticized the Palestinians in a conflict against Israel.

Equating both sides as human rights abusers does not make the report “unbiased”. In the assertion that Israel committed war crimes, and indeed throughout the report’s 183 pages, it maintains the same inherent biases against Israel that have come to be expected from all UN entities, even whileinternational military experts tasked with investigating the conflict have concluded that “none of us is aware of any army that takes such extensive measures as did the IDF last summer to protect the lives of the civilian population … [The] IDF [frequently] declined to attack known military targets due to the presence of civilians, risking, and in some instances costing, Israeli lives.” Other international legal scholars claim that Israel has gone too far in protecting civilians during armed conflict, and warn that the humanitarian standards set by Israel in its conflicts in Gaza set a dangerous precedent for moral armies fighting asymmetric wars against terrorists around the world.
Mr. Tharoor also concluded that “the report’s findings may feed into the growing case file at the [ICC]…[which] would deepen Israel’s growing international isolation…” But legal experts agree that this report will have no effect in the ICC, especially since the report finds Hamas guilty of war crimes as well. The recent reality is that Hamas has become increasingly isolated, as the entire Arab world has reached out to Israel to forge new alliances to combat Hamas and other radical Islamic extremist groups. Egypt,Jordan and Saudi Arabia – once Israel’s staunchest enemies – have all undertaken new prerogatives to establish diplomatic relations and partner with Israel to advance regional security and domestic prosperity.

Peace will be possible when the Palestinian leadership decides to care more about the health and prosperity of its people than the death and destruction of Jews and Israel; when it renounces violence and declares that Palestinians will coexist in peace with Jews; and when it accepts Israel’s Jewish character and its place in the community of nations. Until then, the suffering and subjugation of the Palestinian people is on the hands of their leadership alone. The Palestinian people, and all members of the international community, must push Palestinian leaders to make the necessary internal changes that could facilitate a real and permanent peace.