Tony Ehrenreich has at last apologised to the Jewish community for his conduct.

Nearly six years after posting a comment inciting violence and hatred against the leadership of the SA Jewish community, former Western Cape Cosatu leader Tony Ehrenreich has at last apologised to the Jewish community for his conduct. The matter goes back to August 2014, when Ehrenreich accused the SA Jewish Board of Deputies (SAJBD) of being “complicit in the murder of the people in Gaza” and called for “an eye for and eye” retribution against its members and other ‘Zionist supporters’ every time a woman or child was killed in Gaza. The SA Human Rights Commission subsequently upheld a complaint of hate speech lodged by the SAJBD and ordered Ehrenreich to apologise. For a screenshot of the full Ehrenreich comment, see below.

SAJBD National Chairman Shaun Zagnoev commended the SA Human Rights Commission for the seriousness with which they had approached the matter and for following it through its various stages to an appropriate conclusion.

“The long-awaited outcome of this case sends a clear message that it is never justified to threaten one’s fellow citizens for representing views that one disagrees with. This is true regarding South African politics, and perhaps even more so when it comes to foreign disputes that have nothing to do with South Africa” he said.

SAJBD National Director Wendy Kahn, who throughout the process has engaged extensively with both the Cape Town and National offices of the SAHRC, described the outcome as an important victory both for South African democracy and the ongoing fight against hate speech in the country.

“As the SAHRC has stressed, words have immense power for both good or bad, and therefore all people, and especially those in leadership positions, need to be mindful of how they express themselves in public forums” she said. 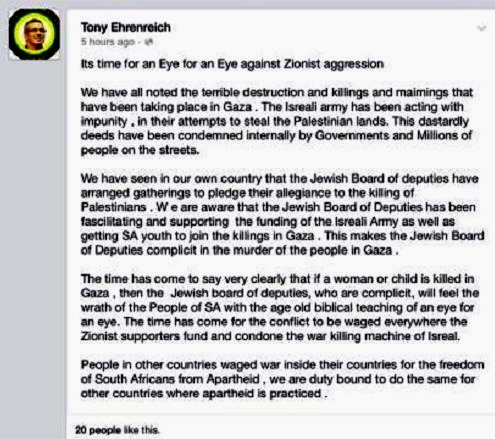 Two distinguished Jewish members of the British establishment find themselves at loggerheads in the early years of the Palestine Mandate.

For the past week rockets fired from Gaza have rained down on Israeli towns in the south of Israel. Yesterday, it was Jerusalem’s turn to be targeted. Rockets are indiscriminate. They imperil the lives of all who live in the Holy City, whether Jew, Christian or Muslim.

SAJBD responds to JSC: We deplore the politicisation of the judicial selection process

The South African Jewish Board of Deputies (SAJBD) has approached the Judicial Service Commission (JSC) for a meeting to discuss the discriminatory and unconstitutional manner in which two Jewish candidates for judicial positions were treated during the recent JSC interviews. During these interviews, it was patently obvious that even being associated with the representative body of South African Jewry could jeopardise the candidates’ chances of being appointed. We request that the JSC provide copies of the letters “from various organisations” that it relied upon when adopting this line of questioning.