SAJBD Conference Recording and Report Back 2021

View the recording of the SAJBD National Conference 2021 below:

As the representative spokesbody of South African Jewry, the SAJBD ensures that the voice of the community is heard on all issues that concern it. To this end, it maintains effective channels of communication and forges sound working relationships with leading figures in the political, media, educational and civil society spheres. 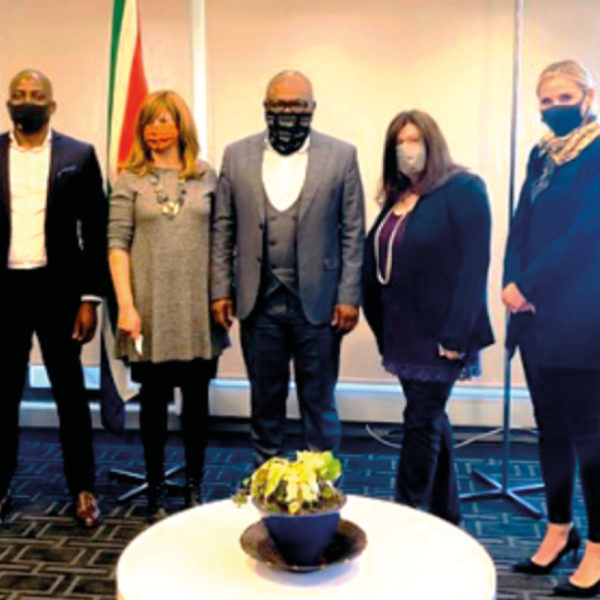 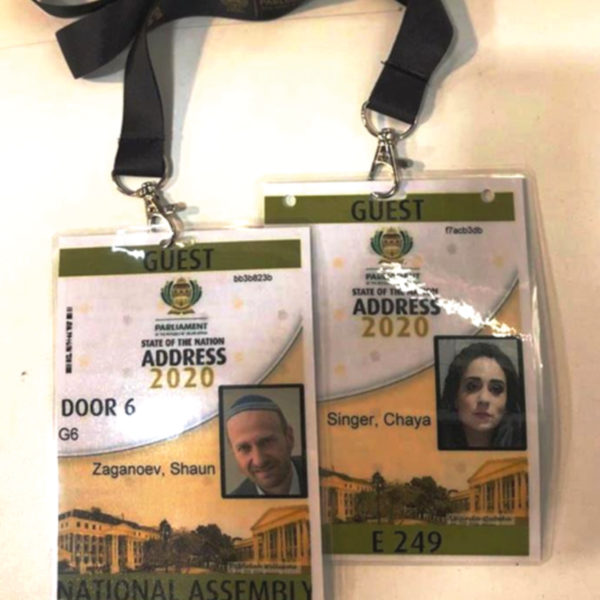 Representing the community at the 2020 State of the Nation address: SAJBD National Chairman Shaun Zagnoev and the then Parliamentary Liaison Chaya Singer 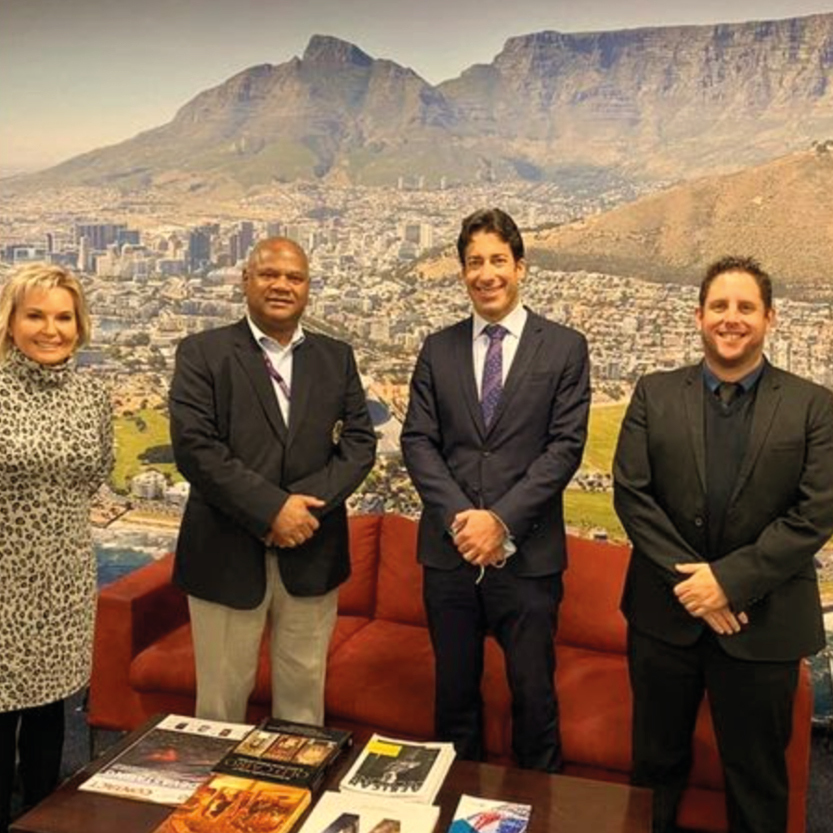 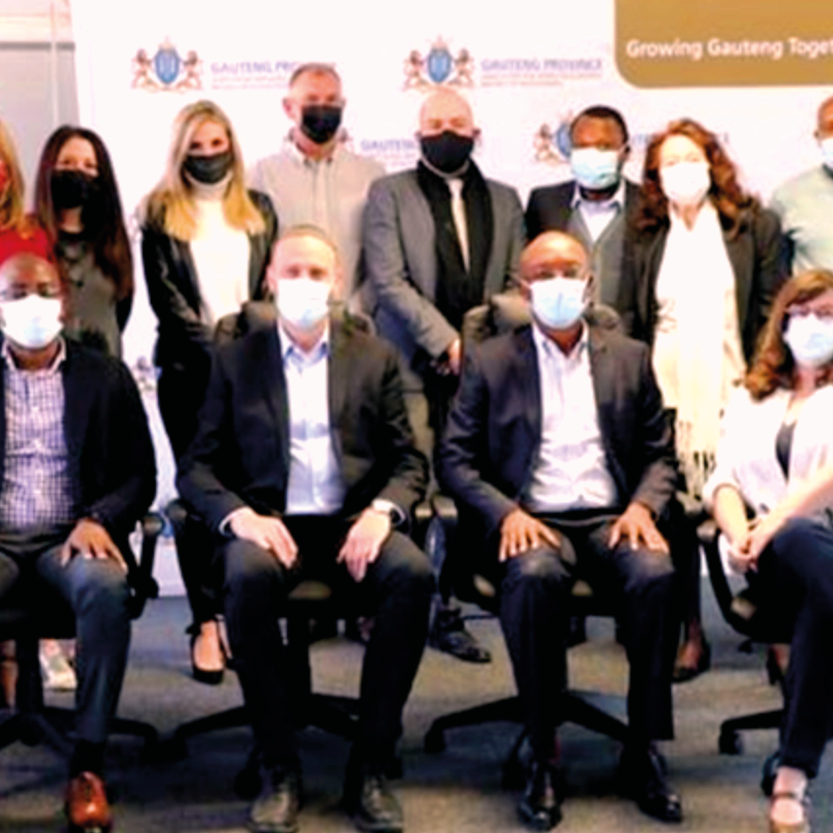 The Board safeguards the Jewish community against antisemitic attacks, using its legal, media and diplomatic resources to deal with all incidents that come to its attention and working where necessary with such State institutions as the SA Human Rights Commission, Equality Courts and broadcasting regulatory authorities. Since the last conference, a number of hate speech cases were brought to a successful conclusion. In partnership with the SA Zionist Federation and others, the Board also combats anti-Israel bias, including on university campuses and in the media and political spheres. 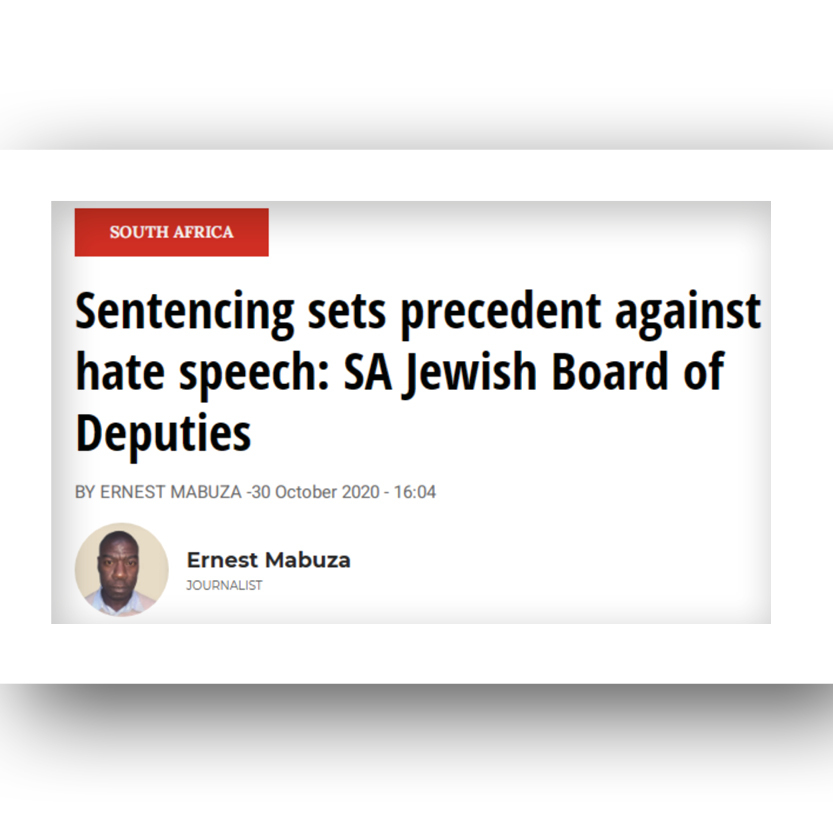 The Board also successfully approached the Randburg Magistrates Court for a restraining order against white supremacist and Nazi sympathiser Jan Lamprecht. 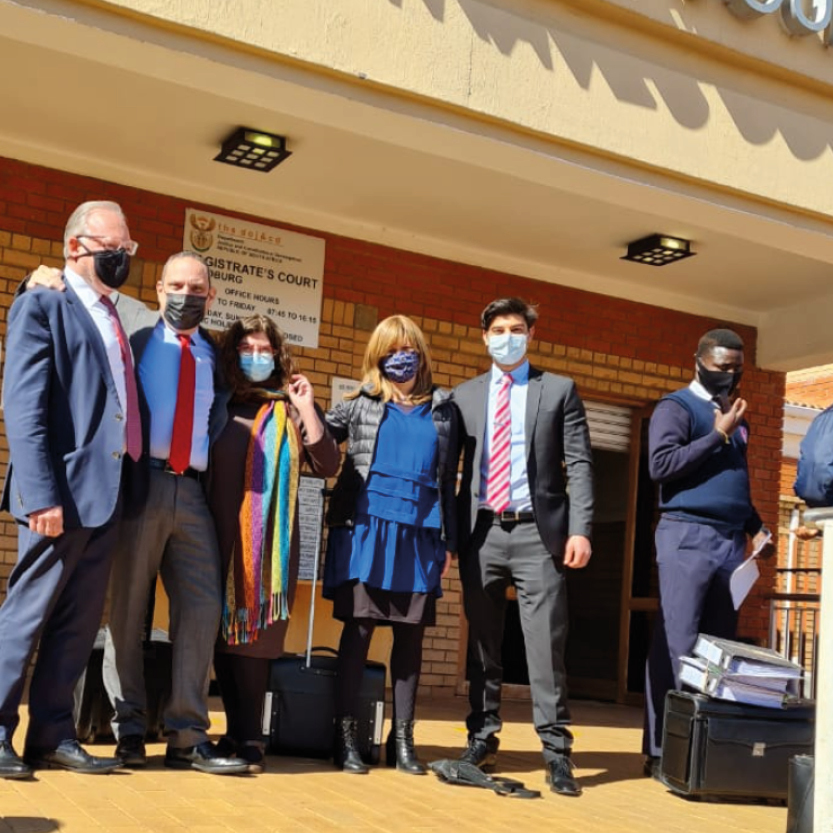 Pictured outside the court after the ruling are Advocate Laurence Hodes, Ian Levitt and Nick Kourie from Ian Levitt Attorneys, Prof Karen Milner and Wendy Kahn.

In October 2020, the Randburg Magistrates Court imposed a first-ever criminal conviction for antisemitism against Matome Letsoalo after he had incited violence against the Jewish community. 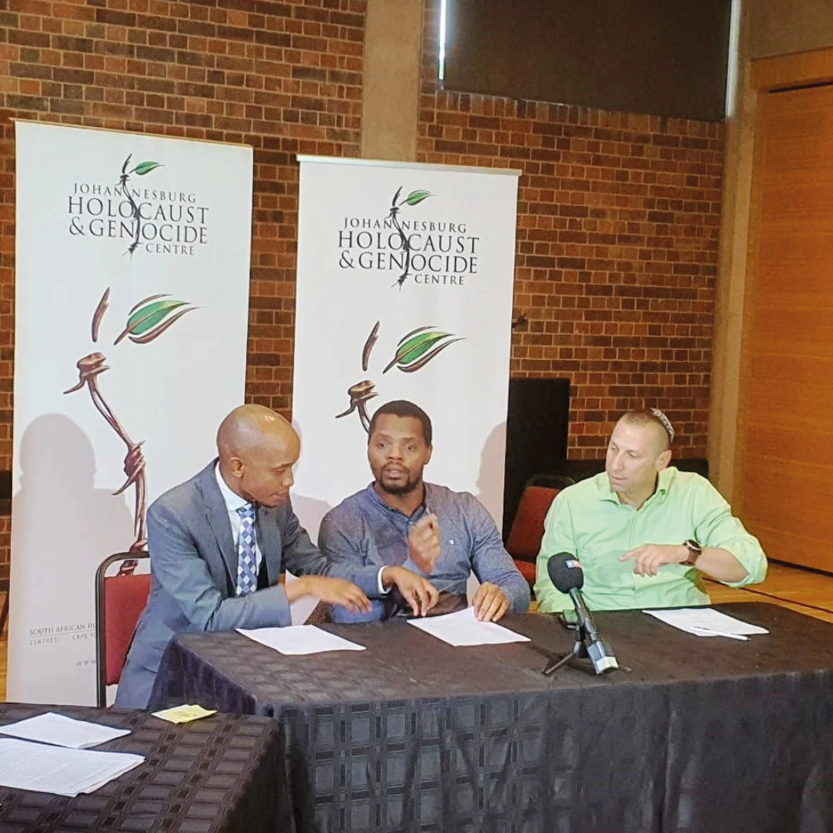 In December 2020 former Wits SRC President Mcebo Dlamini apologised for his 2015 offensive remarks against the Jewish community. He went on a facilitated visit to the Johannesburg Holocaust & Genocide Centre. This followed a successful mediation between the SAJBD and Dlamini facilitated by the SA Human Rights Commission.

The two years since the last SAJBD conference have been dominated by the worst pandemic in living memory, the deadly and destructive effects of which continue to be felt the world over. To help the Jewish community navigate these exceptionally difficult times, the SAJBD has taken the lead in coordinating a wide range of support programmes, educational and advisory projects and relief initiatives.

Access to reliable, up-to-date information has been critical to maintaining communal safety. In view of this, the Board set up a COVID Jewish Community Platform to provide expert medical, financial, mental health and legal advice, as well as updates on local developments and decisions. 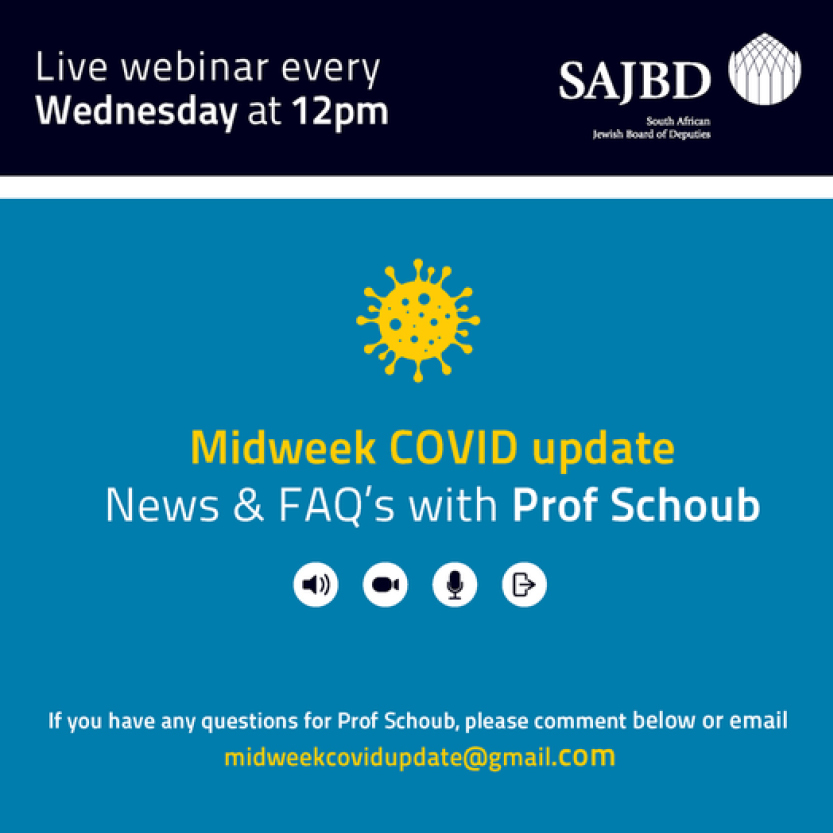 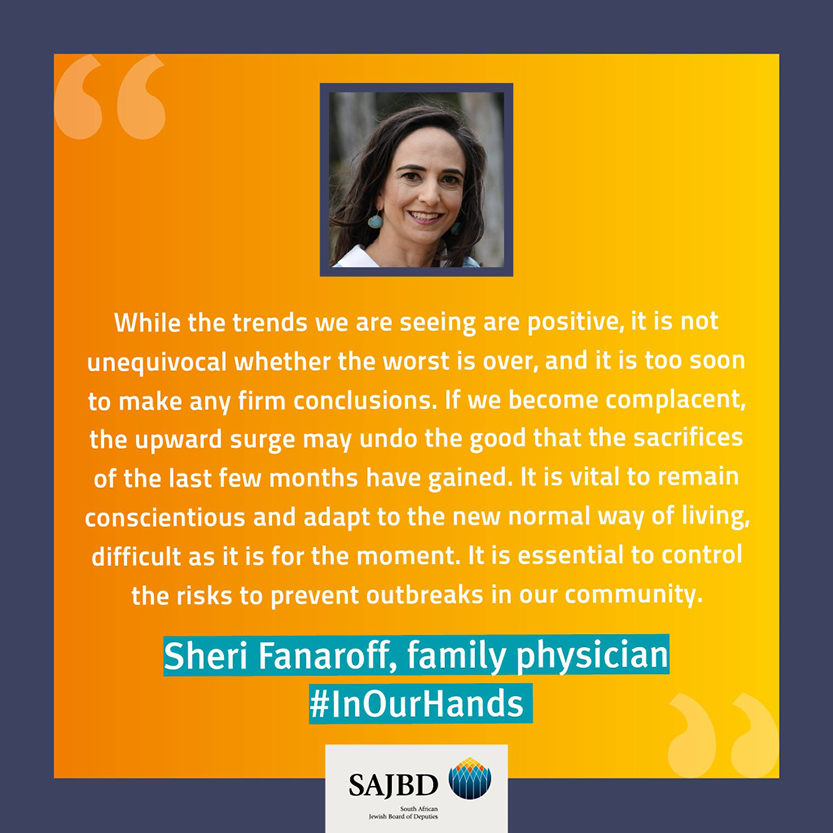 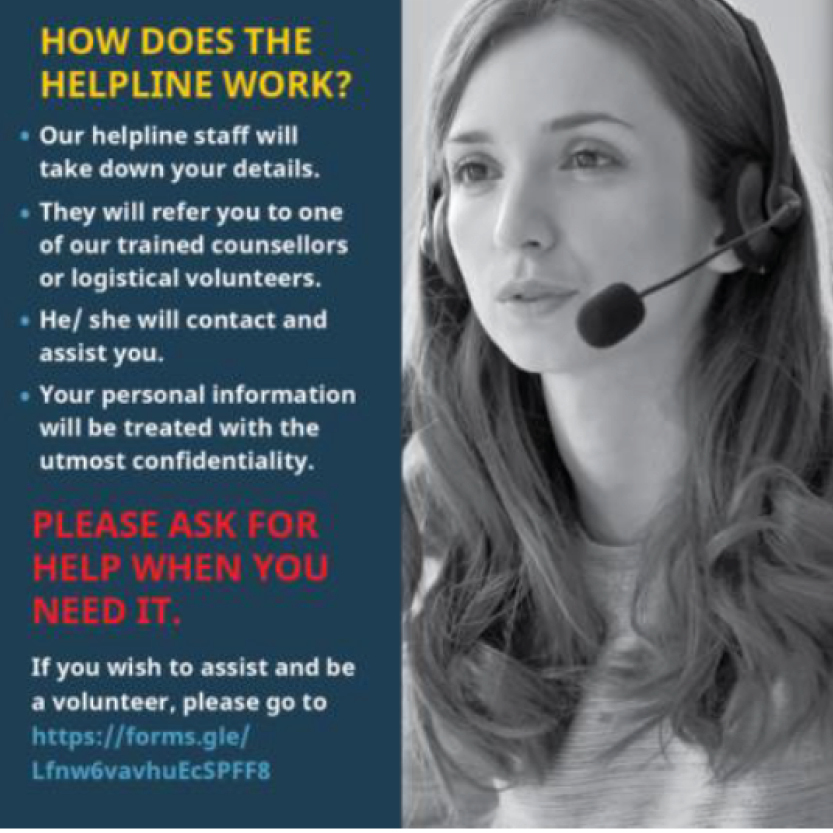 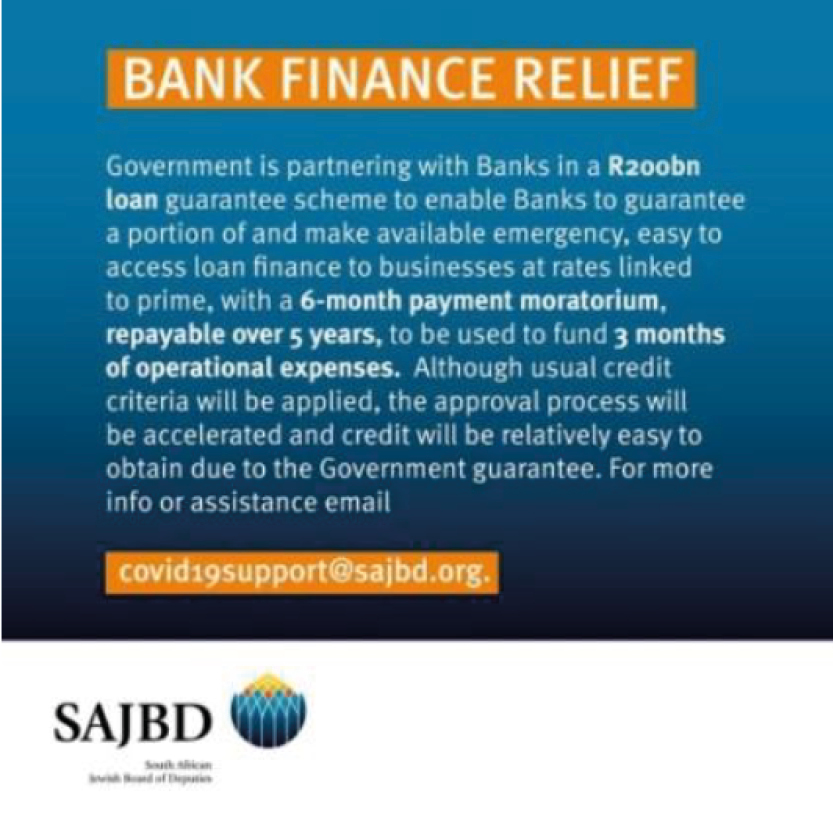 The Board convened regular community leadership forums to ensure coordinated, strategic and properly communicated responses to every aspect of the pandemic. 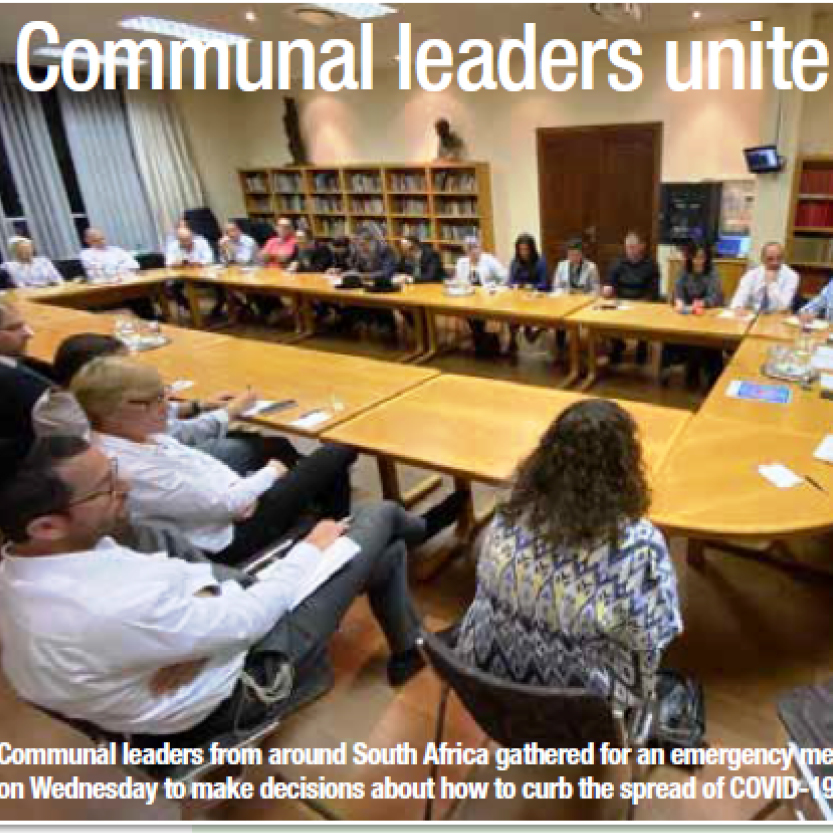 With the assistance of donors in the community, the Board set up an emergency Food Relief Fund to alleviate hunger in rural and urban areas across eight provinces, working closely with the Angel Network and other Jewish organisations. It further participated in many Community Action Network (CAN) initiatives and widely publicised the outreach work of the Jewish community. 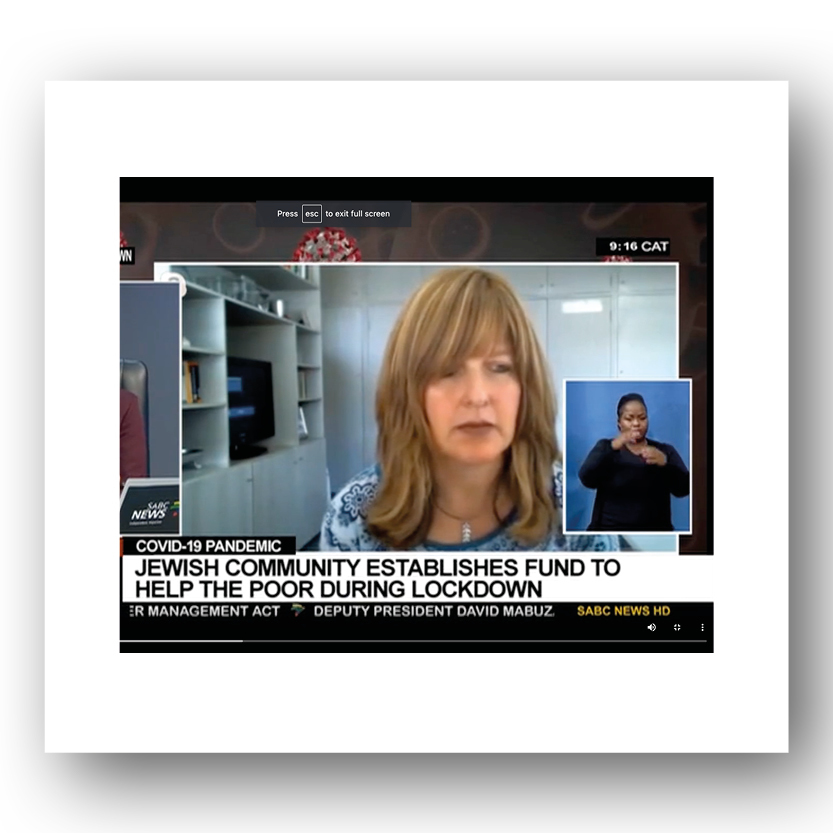 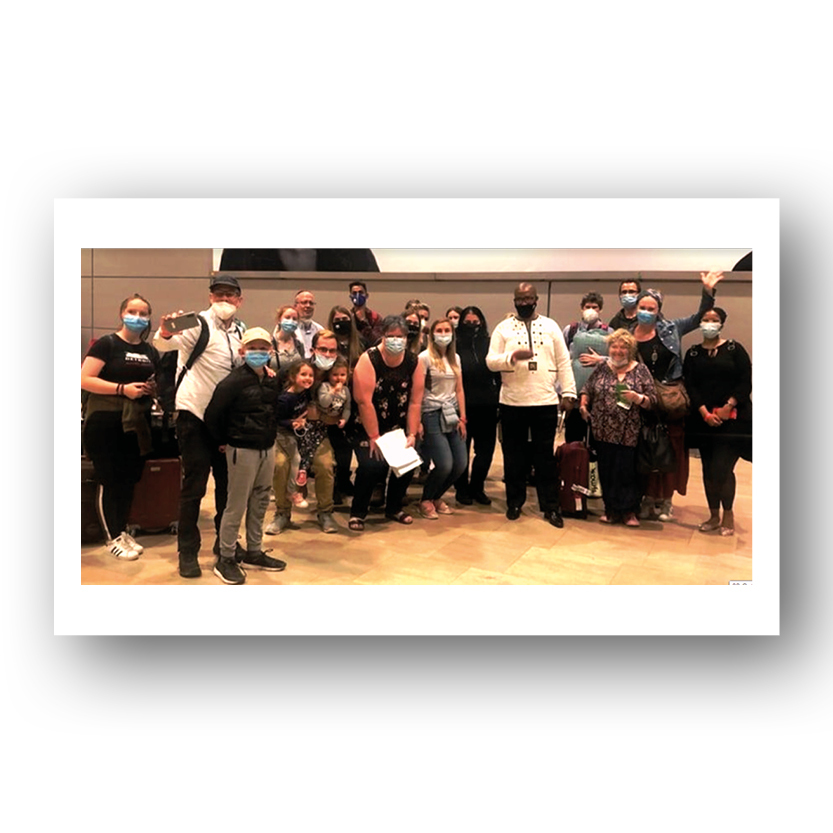 Working with the South African and Israeli embassies, Departments of International Relations and Cooperation and Home Affairs, international airlines and others, the Board was instrumental in repatriating dozens of South African citizens stranded in Israel and assisted individuals in travelling to Israel on compassionate grounds. 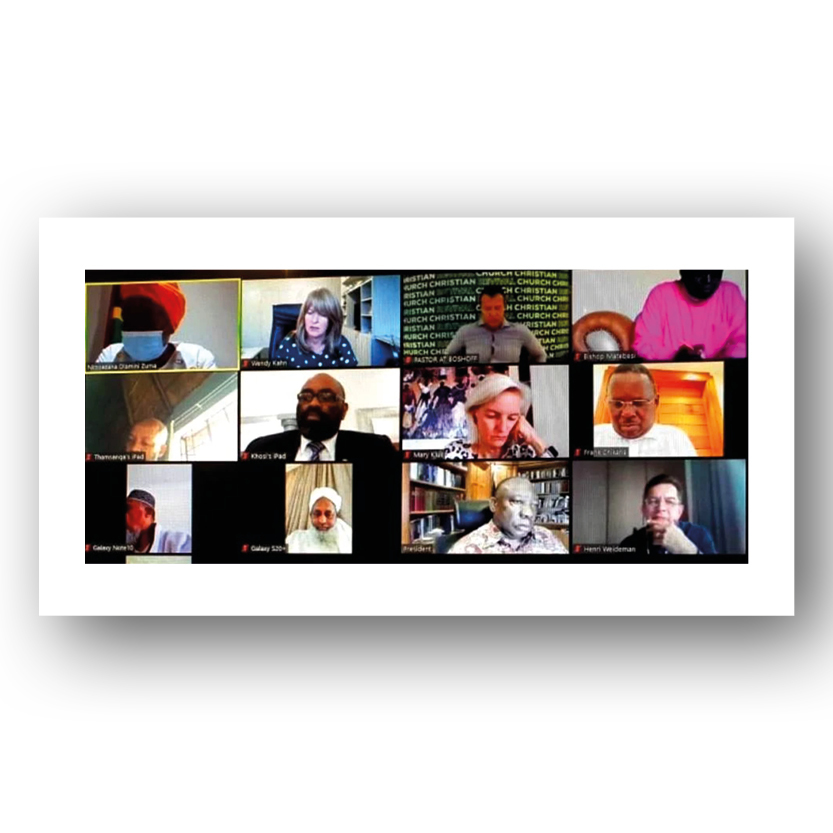 The SAJBD maintains solid working relationships with global Jewry, building coalitions to address such common issues as antisemitism and security, defending Israel and fostering cultural and intellectual exchanges. Board members hold important representative positions on international Jewish bodies, including the World Jewish Congress (WJC). President Mary Kluk and national vice-chairman Marc Pozniak sit on the executive of the WJC while Alana Baranov is a member of the steering committee of the WJC Jewish Diplomatic Corps. Through sharing skills and experiences, the SAJBD enhances its own effectiveness while also leading South African Jewry in being an active, contributing component of the greater Jewish world. 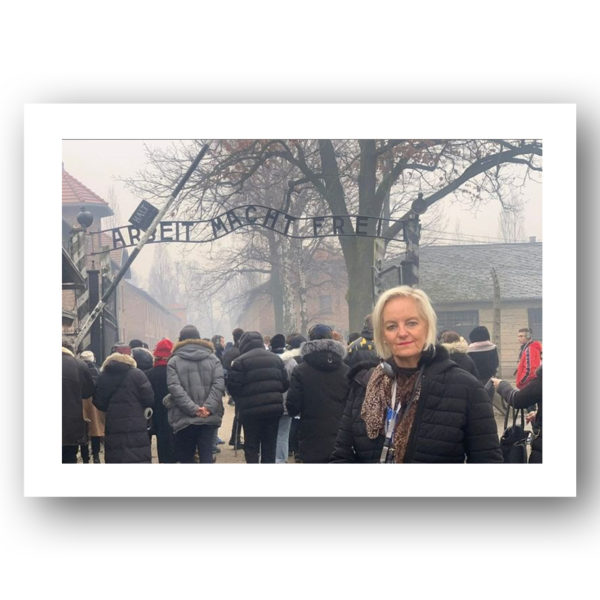 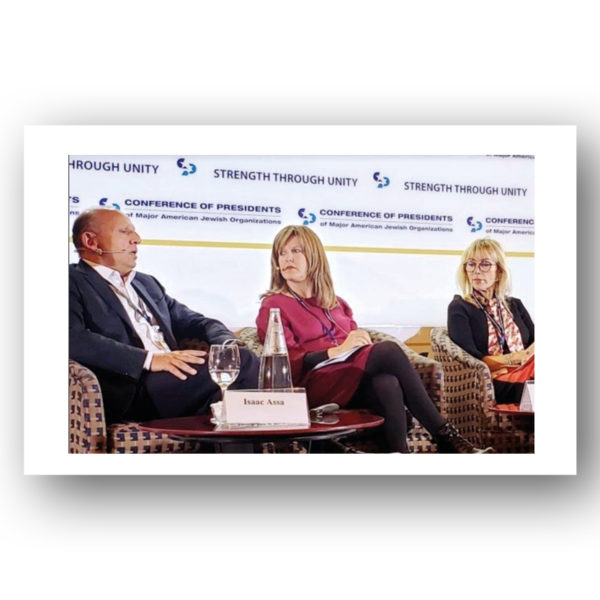 Wendy Kahn as a panelist at the Conference of Presidents of Major American Jewish Organizations annual leadership summit, Jerusalem, 2020 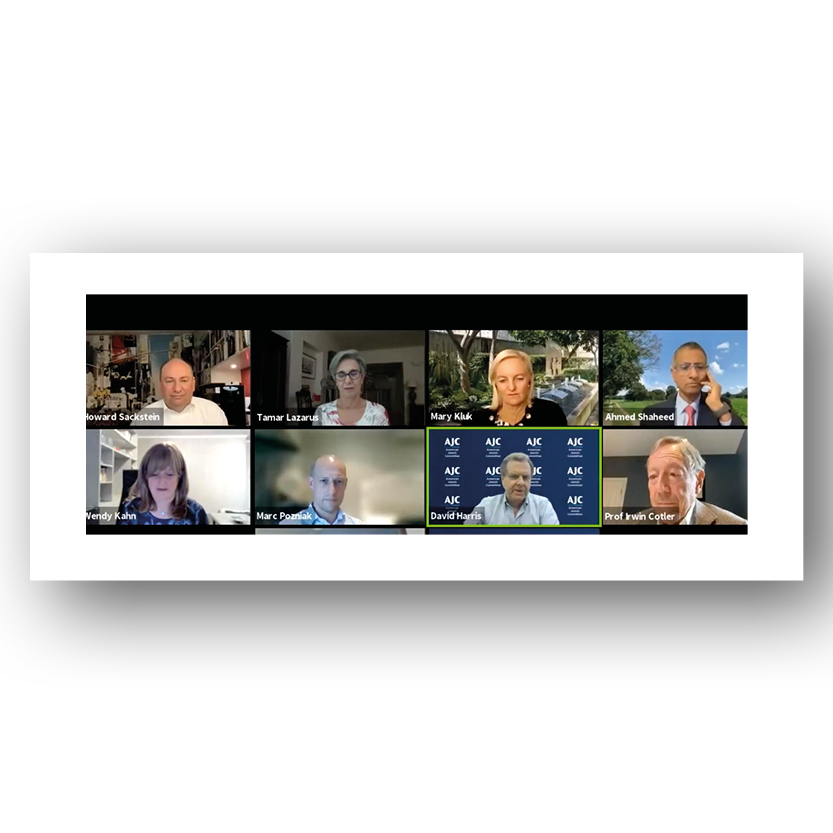 In September 2021, the SAJBD and SA Jewish Report held a joint webinar to mark the 20th anniversary of the UN World Conference against Racism, an event notorious for propagating antisemitism in the name of fighting racism. Panellists included former Canadian Minister of Justice Prof Irwin Cotler, UN Special Rapporteur on Freedom of Religion or Belief Ahmed Shaheed, Director of the Blaustein Institute for the Advancement of Human Rights Felice Gaer and American Jewish Committee CEO David Harris.

It further works with other organisations in combating prejudice and fostering a culture of respect and tolerance for diversity in the wider society. Board spokespeople regularly comment on a wide array of issues for both the local and international media.

The SAJBD’S Communications Department promotes the work of the SAJBD, publicises what Jewish organisations and individuals are contributing to South Africa and responds to anti-Jewish and anti-Israel bias. 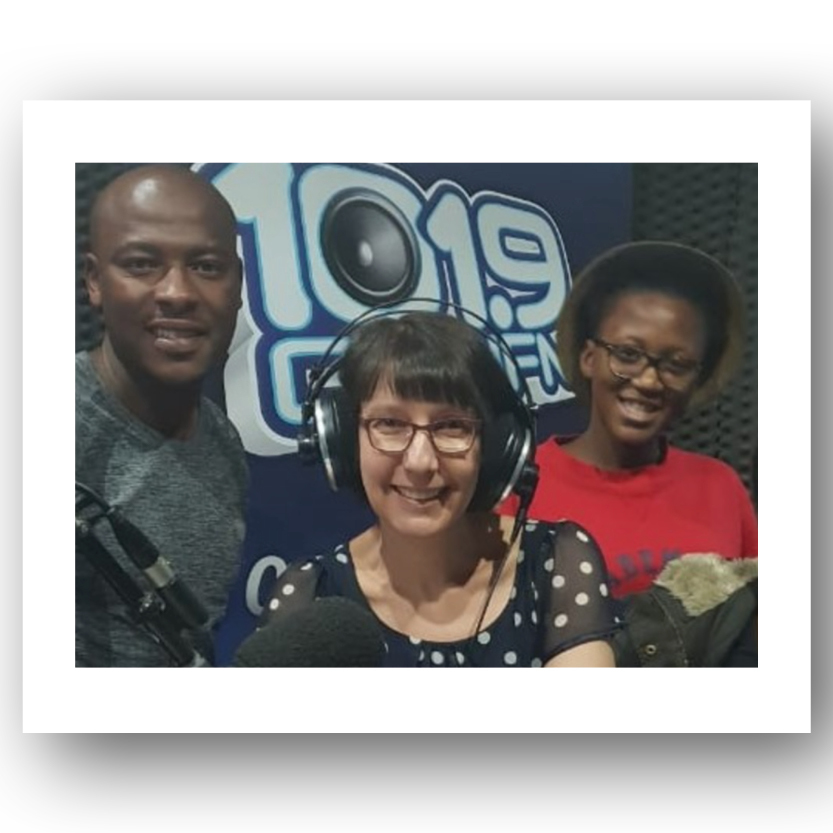 Through its weekly current affairs programme Jewish Board Talk on 101.9 Chai FM, hosted by Charisse Zeifert, the Board highlights issues of importance to the local Jewish community as well as publicising the activities of a wide range of Jewish organisations and individuals. 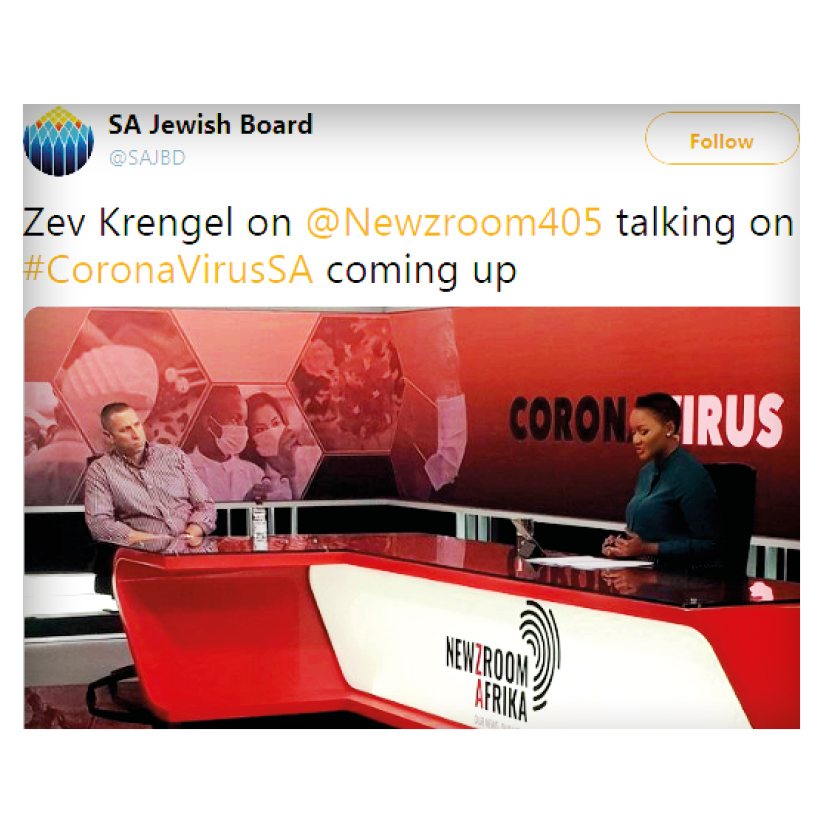 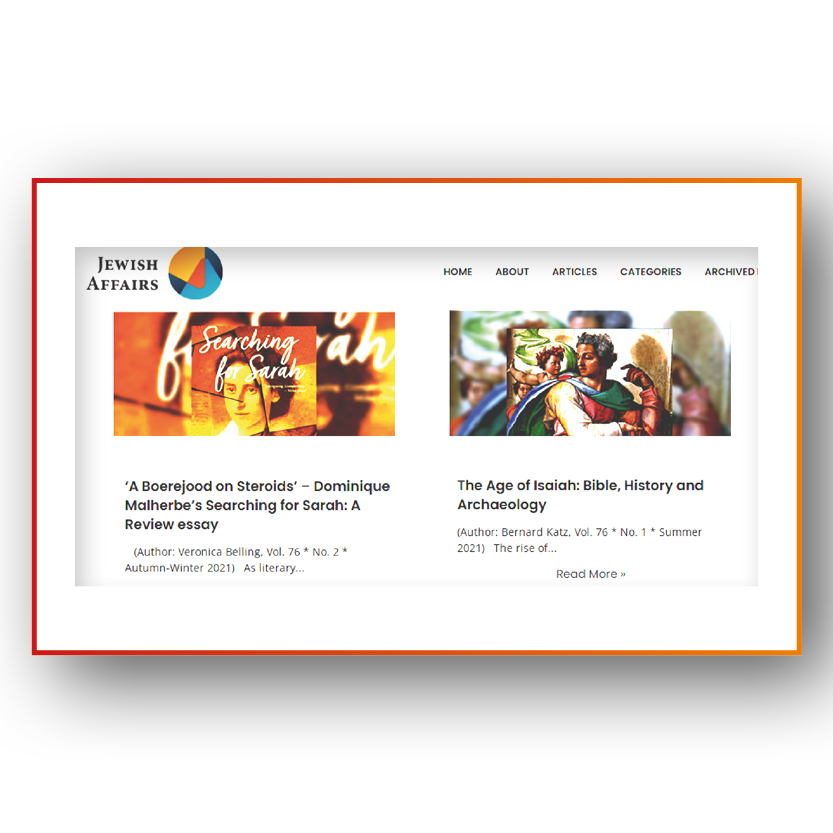 Jewish Affairs, a journal devoted to Jewish history and culture, has been published under the auspices of the SAJBD since 1941. This year, JA marked its 80th anniversary with the launch of its new website (https://www.jewishaffairs.co.za/), which includes all material publish since the beginning of 2009.

The Board organises the annual Yom Hashoah ceremonies in all major centres countrywide. Due to COVID restrictions a unified virtual national commemoration was organised in collaboration with the SA Holocaust and Genocide Centres. This attracted an audience of 17 000 people.

Despite additional difficulties caused by the lockdown, the Board continued to work with the relevant universities in successfully resolving problems of exams being set on Yom Tov. 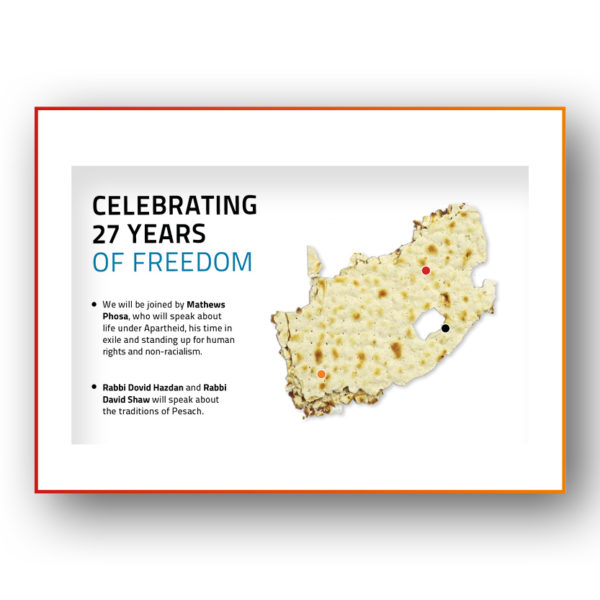 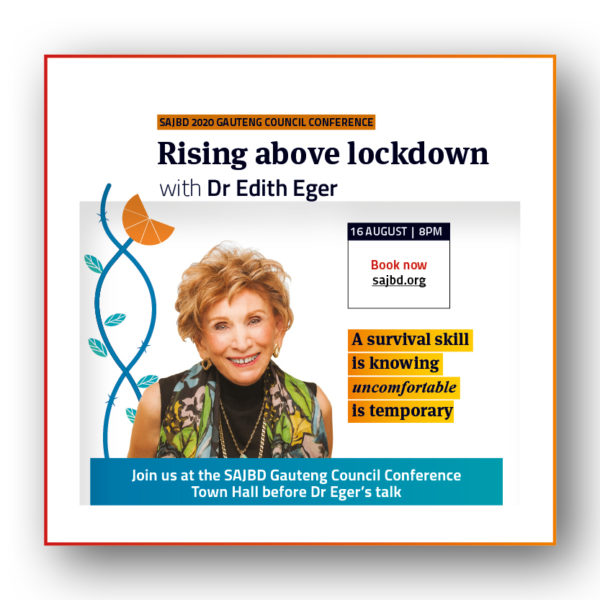 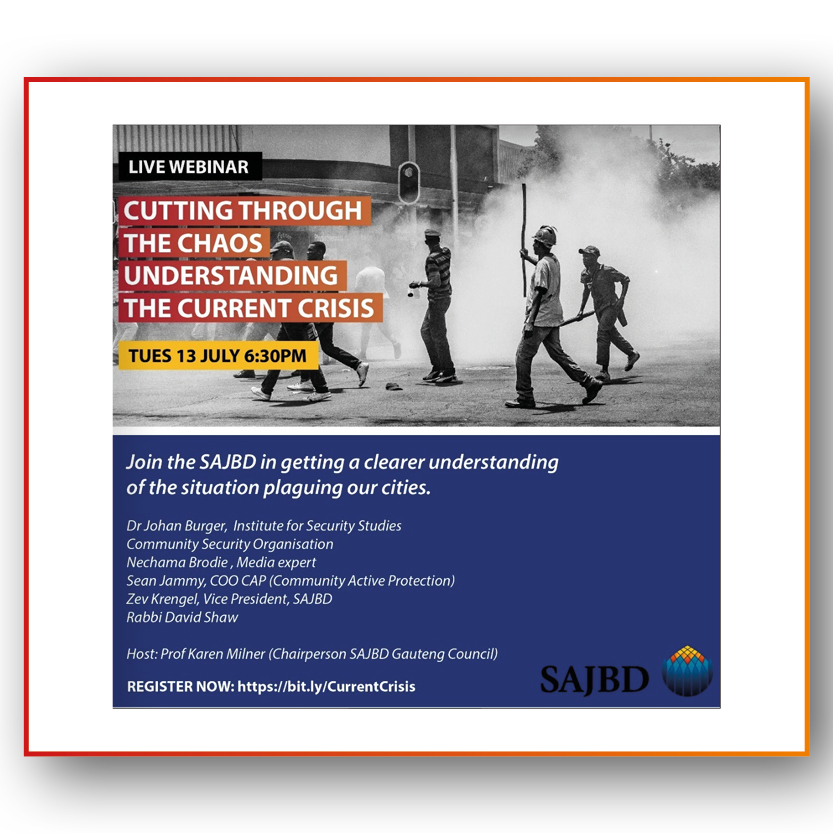 In times of crisis in the wider society, the Board involves itself in disaster relief and social upliftment projects. The Board was called upon to assist with relief during the unrest and looting in KZN and Gauteng in July 2021. The national, KZN and Gauteng Boards assisted with immediate food relief and thereafter the clean-up and rebuilding processes. 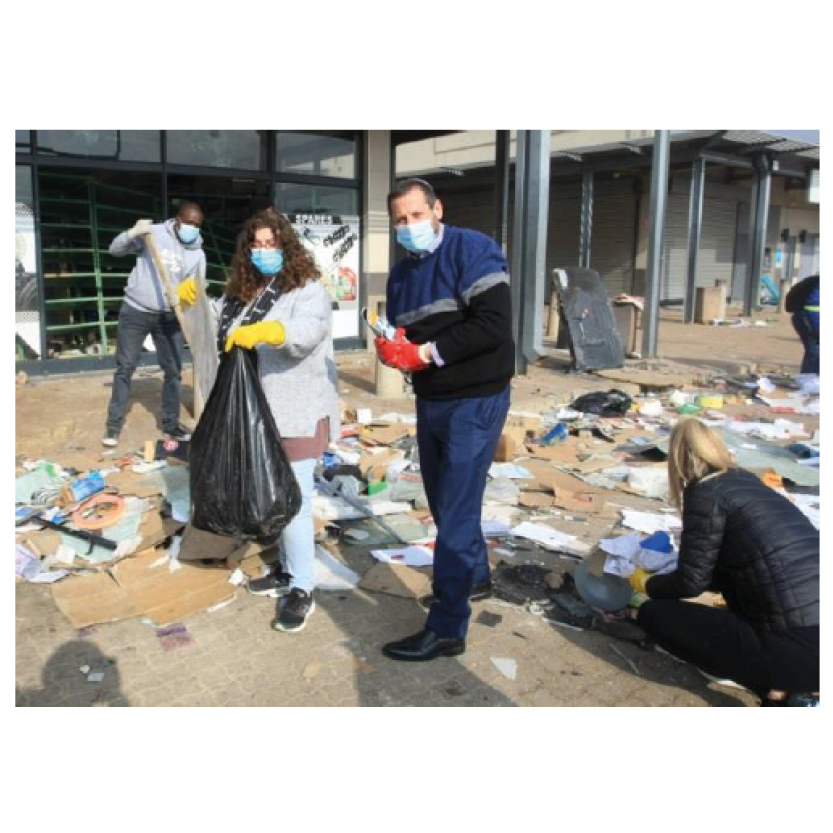 “The SAJBD assisted with a post-riot clean-up in Daveyton and afterwards delivered food relief to the ECD centres, schools and aged homes in the East Rand, Soweto, Alexandra, Durban, Inanda and Phoenix’. 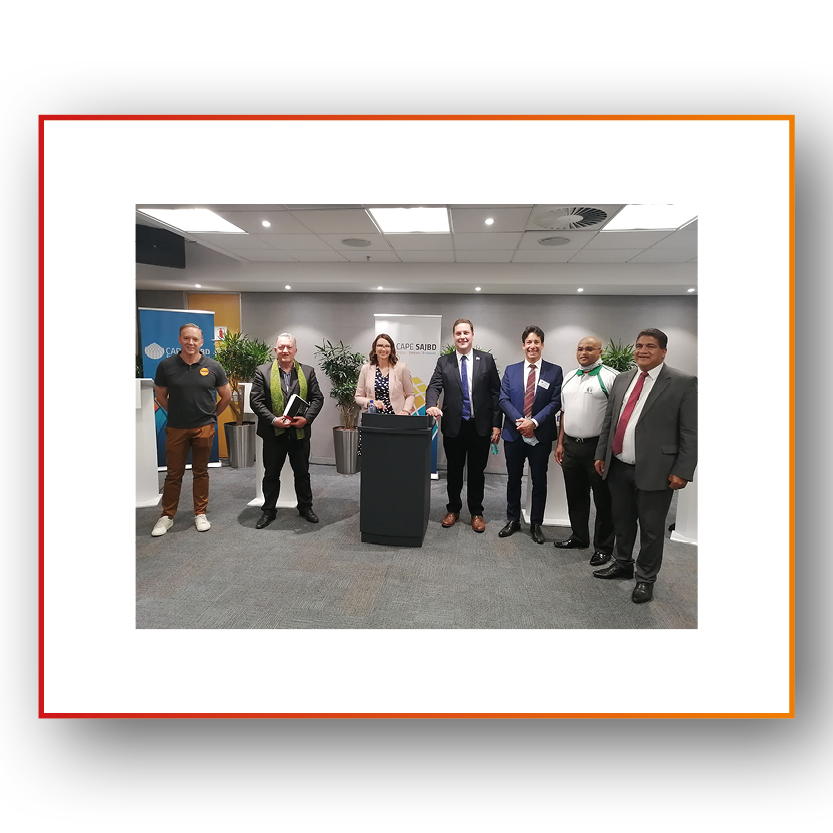 For the 2021 local government elections, the Board is again running its regular #MakeUsCount pre-election awareness campaign to help the Jewish community identify with and involve itself in the democratic process. The campaign includes multi-party election debates, a voter registration drive and assembling a multi-faith election observer team to assist the Independent Electoral Commission on voting day.

This year, we are honoured to have Ambassador Deborah Lipstadt as our guest speaker.

Deborah Lipstadt is a historian, academic and the author of award-winning books: “The Eichmann Trial”; “Denial: Holocaust History on Trial”; and “Denying the Holocaust: The Growing Assault on Truth and Memory”.

Our thoughts and prayers are with the people of Britain at the passing of Her Majesty Queen Elizabeth II. During her long reign, Queen Elizabeth represented the British people with dignity, grace and unswerving devotion. We join them and those around the world in remembering her remarkable legacy, in which she always put duty and service to her country before herself. MHDSRIP