Keeping an Eye on Things

Reflections and stories from my experience as an election observer.

Elections are a special time. They bring with them optimism, excitement, and new horizons. In our country they symbolise hard fought for and cherished free talking to fellow South Africans whom we would normally never meet, while waiting in a queue to vote. We laugh together, moan and commiserate about the long wait, but also reminisce about the magical 1994 election. It is a great leveller. 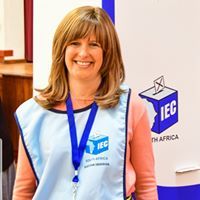 For my fourth election, I had the privilege of donning the blue IEC bib and important looking lanyard and being an election observer. I found it a deeply meaningful experience to play a role upholding and protecting free and fair elections as a cornerstone of our democracy. The SAJBD’s IEC election observer team consisted of 230 interfaith and multi-national observers from 7 provinces. We estimated that 800 election centres were visited by our observers throughout the day in urban and rural areas. Election observers were trained and prepared prior to the day through on-going communications and via a webinar organised by the SAJBD. Throughout the day, members on an active WhatsApp group shared experiences, raised concerns and asked questions. My SAJBD colleagues Yanir Grindler and Alana Baranov were constantly on hand to respond to issues and provide guidance. Many of the observers remained at stations long into the night to observe the counting process.

But it wasn’t all serious. There were some wonderful laughs throughout my day at the Jabula Recreation Centre, where I was based as an observer. A man called us over as he couldn’t find Nelson Mandela on the ballot paper, as this was who he wanted to vote for. The IEC rules state that only the over is permitted into the voting booth at the time of the voting. If assistance is required by the voter, the presiding officer, election observer, and the party representatives join the voter to make sure there are no irregularities. One elderly woman became quite agitated that we could not allow her husband to join her in the booth. She told us, “but he needs to tell me who to vote for!!!”. We also had a giggle at the 99-year-old woman who refused to have her nail marked as she had just had a French manicure. She was outraged at the suggestion.

I was deeply moved by the care and kindness shown to the many elderly voters at our station by the presiding officer and his staff. They were handled with great compassion as they came to cast their votes. The entire election process was well-run. I was privileged to have been present at some of the highlight events of the 2019 voting, including the launch of the 2019 “Xse” campaign, the launch of the Results Operation Centre in Tshwane and the final Results and Gala dinner with President Cyril Ramaphosa and all of the political parties. It was an exhilarating eventing, where, for a brief moment, all the parties put aside their hostility and celebrated a successful election.

Another highlight of the elections was the accommodation of Jewish voters on motzei chag and shabbat. International voting was scheduled on a Saturday, which would be problematic for Jewish voters. We contacted the Chief Electoral Officer and arranged a meeting. Following from that, our community was accommodated whereby embassies would remain open after Shabbat and Pesach so that Jewish South Africans abroad could vote. Embassies, High Commissions, and Consulates in London, Tel Aviv, New York and Los Angeles stayed open until 11.30 at night to uphold our religious rights. The consulate in LA remained open for one voter. All media reports of the international voting made reference to the accommodation of the Jewish voters.

As we reflect on the election, one acknowledges that in May 2019 the true winner of the elections was democracy.

The "Cane Mutiny", a "Feral Culture", rawfers and shluppers and liedjies on the school bus - All this and more in this final part of the author's history of Herber House hostel.

Together with the Board’s Parliamentary Liaison Chaya Singer, I attended last week’s State of the Nation (SONA) address in Parliament. Without underplaying the very formidable challenges that still need to be overcome, what we heard was a cause for at least cautious optimism. Much of what President Ramaphosa said remained on the level of hopeful rhetoric rather than substantive action, but I was personally encouraged to learn about the genuine progress that is undeniably being made in certain crucial areas

Faith Communities meet with President ahead of SONA

At the time of writing, the upcoming State of the Nation address (SONA) on 13 February is the dominant issue on people’s minds. Last week four representatives of the SAJBD, together with Chief Rabbi Dr Warren Goldstein participated in a meeting of faith-based leaders at the Union Buildings in Pretoria.