“Stop the HATE. The slow march towards healing.”

While 2016 was still in its infancy and we were surfacing from the holiday euphoria, we got the news that has shaken our precious democracy; that racism was well and thriving in our country. Penny Sparrow

The SAJBD issued a statement voicing that the hate-filled language that was emerging on social media had no place in our democratic SA. We condemned all forms of racial hatred in a country that was still healing from the pain of our past.

A couple of days later I picked up a comment on our Facebook page, where a member of our community bemoaned the fact that Black South Africans needed to ‘get over’ Apartheid. She asserted that it was time to ‘move on’, in the same way that Jewish people had after the Holocaust and, furthermore, she pointed out the positive trade relationship that exists now between Israel and Germany. I responded at the time that Holocaust survivors had not simply ‘moved on’. It has been 70 years of pain and heartache in terms of trying to come to terms with the horror of the Shoah. I believe that her comments need a more lengthy response than which I can provide here.

At the outset I need to stress that I am in no way drawing comparisons between the Holocaust and Apartheid; to do this would be simplistic and deeply insulting to both travesties of human injustice. I do, however, think that there are some important lessons for our country as we embark on this very difficult process. We need to acknowledge that many ofthe survivors of the Shoah never ‘healed’, and that many of those who did start to work through the pain, did so only decades afterwards. Seventy years after the liberation, survivors are still deeply scarred and affected by the horrors they experienced. For decades, many of them could not speak about the atrocities. Steven Spielberg, through his Shoah Foundation some 50 years later, started recording and documenting the testimonies. Many of these survivors spoke for the "rst time then. Some survivors still have not shared their stories; the pain is still too much.

The trauma has also extended to many of their children and grandchildren, the second and even third generation survivors; they too struggle to heal. And yes there has been a reengagement
with countries such as Germany, Poland, and Lithuania, but this has happened after a very lengthy period and after decades of working through the pain. To flippantly suggest that Jewish people are ‘over’ the Shoah is deeply problematic. We will never ‘move on’, we will always carry around with us the yoke of the Shoah.

The ANC’s Chief Whip Stone Sizani wrote a very powerful article in the Sowetan in which he stated that we should learn from the manner in which Germany criminalised Holocaust denial. Germany has taken a firm and strong stance against anti-Semitism, hate, and Holocaust denial, and he called for this same approach to be used in our country. Decades and decades of oppression, subjugation, and cruelty in our country cannot be overcome in a paltry 22 years. It is going to take decades or more to begin the healing. It is going to be a difficult and gruelling process, but it is something that we need to go through in confronting our evil past.

We of all people understand what a torturous journey this will be. All South Africans need to support one another and work together to attain a democracy that we can be proud of; a democracy free of the ugliness of the Penny Sparrow, Steven Hart, Velaphi Khumalo, and Nicole De Klerk vitriol. We aspire to a South Africa envisaged by the words of the Freedom Charter: “A South Africa that belongs to all who live in it.” 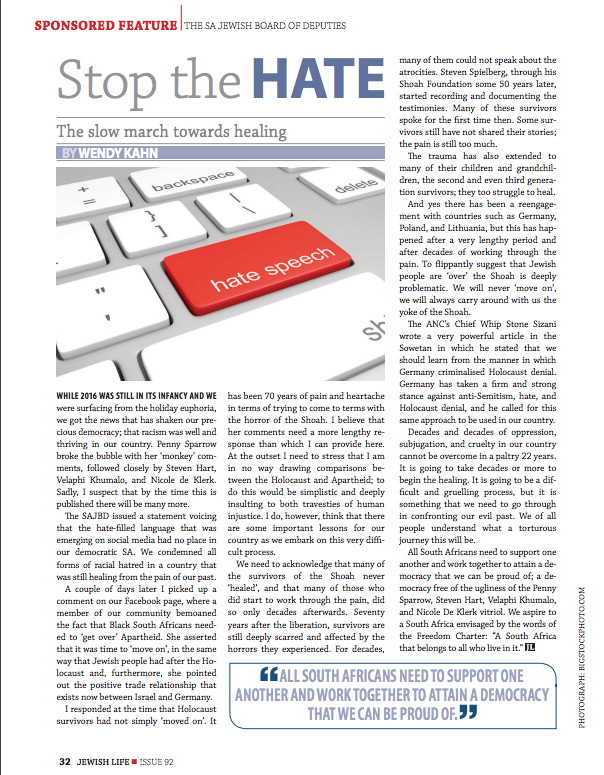